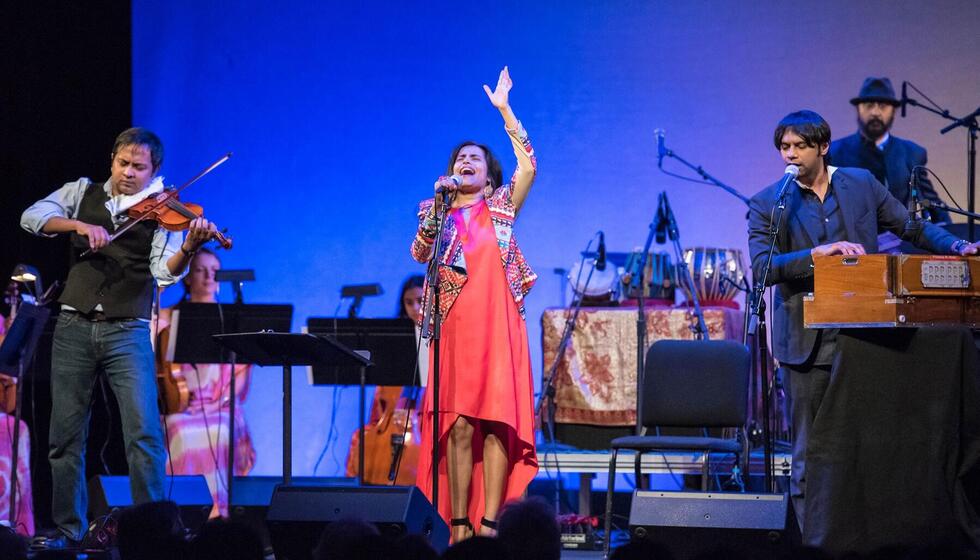 Falu is a GRAMMY award® winning, internationally recognized artist known for her rare ability to seamlessly blend a signature modern inventive style with a formidable Indian classically-shaped vocal talent. In her early years in Bombay, singer Falu (aka Falguni Shah) was trained rigorously in the Jaipur musical tradition and in the Benares style of Thumrie under the legendary Kaumudi Munshi and semi classical music
from Uday Mazumdar. She later continued studying under the late sarangi/vocal master Ustad Sultan Khan, and later with the legendary Smt. Kishori Amonkar (Jaipur style).

Originally from Bombay, Falu moved to the States in 2000 and was appointed as a visiting lecturer at Tufts University. Falu’s subsequent career in the States had led to a series of brilliant and high-profile collaborations with Yo-Yo Ma, Wyclef Jean, Philip Glass, Ricky Martin, Blues Traveler and A. R. Rahman amongst others. She was appointed Carnegie Hall’s ambassador of Indian Music in 2006, where her shows at Zankel Hall have consistently sold out. Falu has performed for President Obama and First Lady Michelle Obama at the White House and was also the featured performer at the Time-100 gala in 2009.

Her songs have appeared on numerous compilations and soundtracks. She was described by The New York Times as “East and West, ancient and modern” and by Billboard as “Ethereal and Transcendent”. Her first album “Falu” was featured in Smithsonian’s National Museum of Natural History’s “Beyond Bollywood” exhibit as representative of the voice of Indian American trendsetting artists. In 2015, Falu was named one of the 20
most influential global Indian women by the Economic Times of India. In 2018, she won the Women Icons of India award in Mumbai, India. Falu was an integral part of Givenchy's September 11th fashion show (Ricardo Tisci collection under the art direction of Marina Abramović) in NYC, where she performed for a star-studded audience. Falu continues to pursue her commitment to introducing children to the wonders
of the world through both of her GRAMMY nominated kids project, "Falu’s Bazaar" and GRAMMY winning follow-up album, "A Colorful World" which take families on a musical journey through South Asia and the day-to-day of a child's wonder, as well as through her artist-in-residence position at Carnegie Hall. She also sits on the NY Chapter
Board of Governors for the Recording Academy.