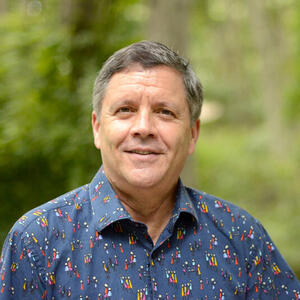 Jim began teaching at Usdan in the summer of 1991 and after more than thirty summers in the woods, he is still as excited as when he first started. Jim is an actor, director and producer who has overseen more than three hundred shows in Usdan’s three theaters. He began his professional work in the arts at the age of five as a commercial model. He was bitten by the acting bug for good in high school. Jim obtained his B. A. and his M.S. in Education at Hofstra Univeristy and studied for his M.F.A. at Columbia. He is the founder of the OnStage Strategies Group, a theater consulting firm assisting educational and local theater programs as they work to grow and re-imagine their student offerings. Jim believes that art has the power to break down the barriers that divide us.