In Defense of the Performing Arts 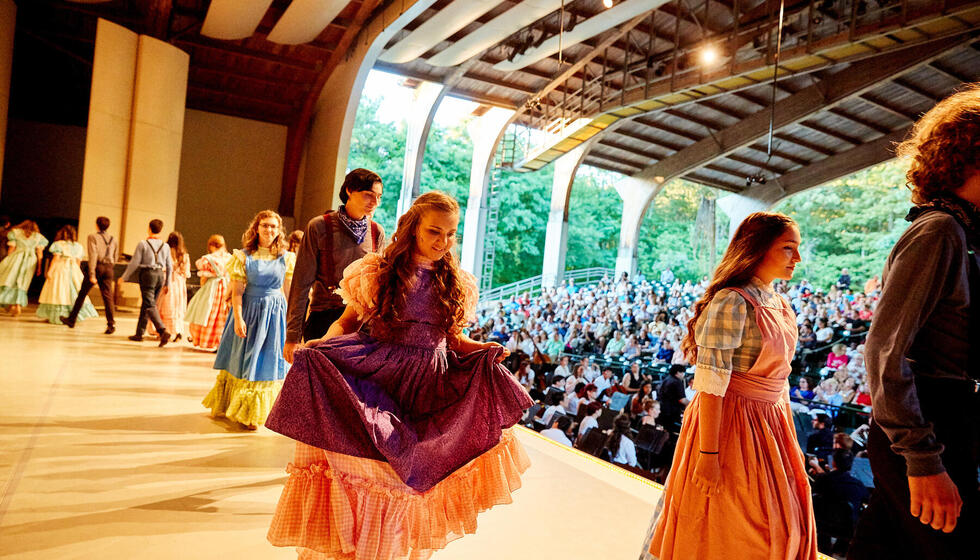 Read on; please do.

Usdan student Ariana' Glaser’s opinion piece In the Defense of the Performing Arts in Long Island Schools was published in Newsday on February 15, 2021.

My mom, who passed away in 2010, would have turned 79 on that day. My mom was the person who taught me that supporting kids makes for a better future for all.

Please read on and see what I mean. When you are finished, I hope you will reply with your perspective on Ariana’s point of view.

A note from the author, Ariana Glaser

During the summer of 2018, I spent a glorious three weeks at Usdan, choosing to Major in a Mean Girls-inspired musical theater program, and Minor in Creative Writing.

Both classes allowed my passions to flourish; in Theater with Marie Danvers and Warren Bloom, I developed my oral voice, and in Writing with Jay Howard, I developed my literary voice. In fact, it was Jay who helped me finalize (and ultimately gave me the resources to publish) my first novella, The World I Never Knew.

I carry the skills I learned at Usdan with me on my journey to develop my artistic skills.

I used much of what I’d learned about creative writing at Usdan to pen my second novel, She Remembers, which was released by Foundation Books in November. My Creative Writing class helped me to grow not only as an author of fiction but also as a writer of poetry, which eventually blossomed into a start at songwriting, which I hope to one day share with the world.

I can wholeheartedly say that I would not be the artist I am today or will be in the future without the start that Usdan provided me.

In Defense of the Performing Arts in Long Island Schools

In late January, I was happy to learn that the state had given its blessing for high-risk sports to resume at the high school level. Surely, a return to the performing arts could not be far behind? Basketball, cheerleading and even wrestling were allowed to resume and masks were not even mandated for those actively participating.

Unfortunately, I was wrong. Teenagers that look to the arts for the fulfillment of their passions were left to wonder: What about us?

"During the time of COVID-19, many of these healthy, positive outlets have been taken from my students," laments Mark Hegreness, Smithtown High School East chorus director, "and though we are doing everything we can to provide opportunities, nothing can replace the experiences they are missing."

In my high school chorus class, we’re still required to sing with masks and 12-foot distancing. The beloved practice of holding concerts for parents and friends is replaced by the poor alternative of recording a video of a truncated performance, which is then uploaded to YouTube. Plays and musicals are performed virtually, if at all. The loss of enthusiastic and lively audiences leaves an unfilled void. While it may be true that teenage athletes are also not afforded the opportunity to play before their usual spectator crowds, they are still able to participate in their chosen sport in every other way. We, performing artists, haven’t been as lucky.

Many in New York have always regarded arts offerings as the poor stepsibling of sports programs. Many school districts allocate a fraction of their budgets to theater, dance and music while devoting thousands of dollars to athletics. Students who plan to use athletic scholarships as a pathway to college are often regarded as higher on the food chain than those who seek a career in artistic expression. These differences have been substantially amplified as a result of New York’s current manifestation of its priorities.

Many students fear that the lack of access to meaningful programs now will impact their career paths and college applications later. "[The pandemic] made me question if I [still] want to do this for a career," a fellow Smithtown High School East classmate worries. "By the time I’m out of college, things could still be crazy. Theaters in the city could never be able to recover and I could have no work ... it’s very scary." Her words ring true: Broadway, one of the very first casualties of the pandemic, lowered its curtains nearly a year ago, and its reopening date is still to be determined. Community theaters have fared no better. If allowed to continue for much longer, the artistic void created by the pandemic may be too great to ever fully overcome for current students.

For students who suffer from isolation, academic disruption, and hopelessness, the arts offer a healthy outlet for self-expression. Especially during the pandemic, it’s natural to search for an escape from stressful situations. For many, that escape comes in the form of theater, fine arts, or music.

No one can deny that health comes first, especially in today’s day and age. Arts students are not asking for anything unreasonable and we understand that large audiences or maskless performances simply aren’t currently possible. But we are asking that the arts be treated equal to every other school activity, and that the state let the show go on.

Ariana Glaser is a singer/songwriter and the author of two novels, She Remembers and The World I Never Knew, both available on Amazon and Barnes & Nobles. You can follow her on her various social media platforms at ArianaNGlaser or on her website ArianaGlaser.com.