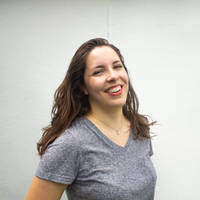 Stephanie Martinez (she/her) is a teaching artist, stage manager, and director from Long Island, New York. She received her BFA in Stage Management from Hofstra University and is currently pursuing her M.S.Ed in Educational Theatre at The City College of New York. Stephanie is the resident director of the West Hempstead Middle and High School drama clubs. She also teaches improv, devising, and acting classes for Mainstages, Queens Theatre, and the Hofstra University Continuing Education Program. Stephanie is particularly passionate about providing culturally responsive and trauma-informed theatrical education to New York students and schools. A fun fact about Stephanie is that she’s a major Shakespeare nerd, and even has a ferret named Puck! This is Stephanie’s first summer at Usdan, and she can’t wait to get out there and play!